The Long Bien bridge, formerly known as Paul Doumer bridge was built by the French company Daydé & Pille between 1898 and 1902. It is 1680 m long. In 1902, it was the longest bridge in Indochina.The Long Biên Bridge was conceived primarily as part of the government-run (Chemins de fer de l’Indochine, CFI) railway line from Hà Nội to Đồng Đăng (built 1899-1902), but from the outset it was also intended as a means of connecting the capital with a second railway line then under construction. The line from Hải Phòng to Lào Cai and Yunnan (built 1901-1910), operated as a franchise by the Compagnie française des Chemins de fer de l’Indochine et du Yunnan (CIY), did not enter the capital, so a connecting service had to be provided across the river from Hà Nội to Gia Lâm. Because of its dual function, the bridge became part of a “communal” railway line administered jointly by both CFI and CIY. 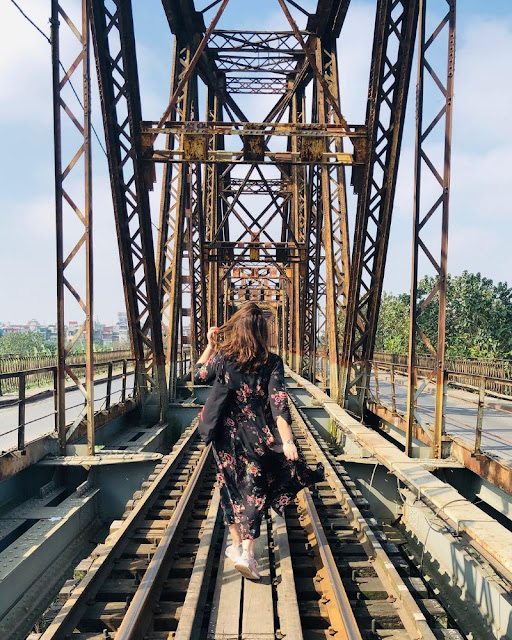 The bridge was originally named after Paul Doumer, the French Governor General who championed the cause of railway construction and whose ambitious “1898 Programme” laid the groundwork for the construction of over 1,300km of railway line in Việt Nam between 1898 and 1914, followed by over 1,100km more during the period 1918–1936.
Costing just over 6 million Francs, it was built between 1899 and 1902 to an in-house design by Daydé et Pillé, following a competition which involved all of the major construction houses. The bridge was inaugurated on 2 February 1902 in the presence of Doumer himself, his successor Paul Beau and the young King Thành Thái, and the first train crossed the bridge on 28 February 1902.
The bridge’s complex 19-span, 20-column cantilever design was immediately fêted as a technological masterpiece. Arriving in Hà Nội soon after it opened, awestruck British travel writer Alfred Cunningham noted: “It is one of the longest bridges in the world, its total length being 1,680 metres (5,505 feet). 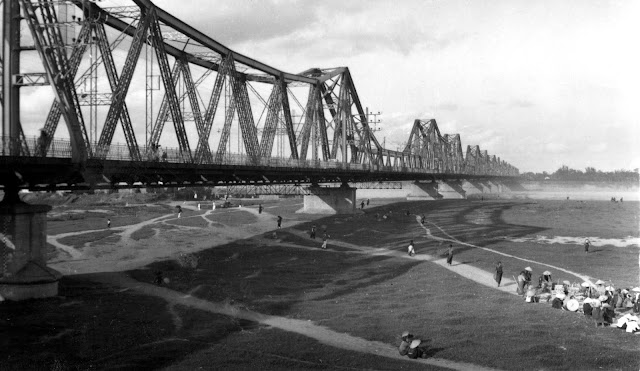 According to Doumer’s memoirs, the engineers who constructed it were Messrs Daydé et Pillé, Creil (Oise) and the superintendent engineer in charge of its erection informed us that his task had been very difficult owing to the subsidence of the soil and the bed of the river. The earthwork leading up to the bridge had sunk three times, to a total depth of three metres, but he thought that was final. The stone columns, 14 metres high, are built up on metal cylindrical piles, 30 metres deep, which are filled with cement. There are 20 stone columns and some idea of its dimensions may be gathered from the fact that it absorbed 80 tons of paint, and the total weight of the steel is 5,000 tons. It is a magnificent work of which the French colonial government may well be proud, as a feat of modern engineering skill, and as a colossal monument to their desire to improve the communications between the provinces and the capital.”

In fact, at the outset this massive structure carried just a single-track railway line bordered by pedestrian walkways, obliging those wishing to cross the Red River by motor vehicle or rickshaw to take a ferry. This has prompted some historians to suggest that the bridge, like many other French colonial structures, was conceived more for its symbolic value than as a key transport hub. 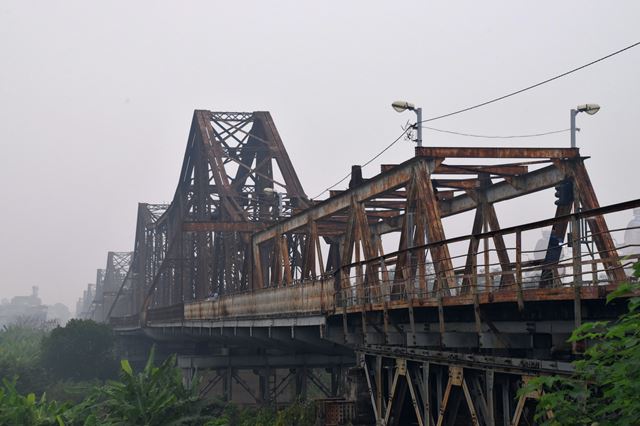 Ironically, the bridge is remembered today not as a symbol of colonial power and prestige, but rather as an icon of defiance against the Americans during the second Indochina War.
Its strategic function later made the bridge a key target for US bombers.

In March 1965, as the Americans unleashed their sustained aerial bombardment known as “Operation Rolling Thunder,” anti-aircraft guns were installed on the central bridge towers. However, in 1966-1967 the bridge was hit on no fewer than 10 occasions. At first, running repairs succeeded in keeping it open to rail traffic, but in August 1967 the central span was destroyed, severing the vital rail link across the Red River.
Altogether, seven spans and four support columns were destroyed during the American War. After the Paris Peace Accords, work began to rebuild the bridge using steel supplied by the USSR, and by March 1973 trains were once more running through from Hà Nội to Gia Lâm junction. Since the need to ensure architectural integrity was not high on the agenda, those wartime reconstructions left only half of the bridge with its original shape.

To locals, Long Bien Bridge is a place not only helping people to cross the Red River but also preserving historical memories. To tourists, the construction is a historic place which could remind them of the crime of the American army during the Vietnam War. 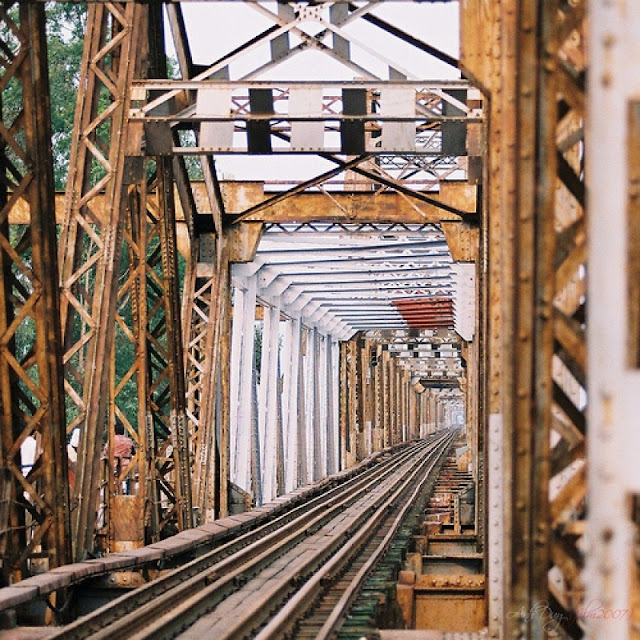 Unlike the fast speed of motorbikes, walking across Long Bien Bridge is a worth-trying choice of many visitors who want to escape from the bustle and hustle of Hanoi City. As it's over a hundred- year- old history, the bridge seems to be perilous with small holes in the sidewalk. So be careful with every step when you walk across the bridge. With the impressive 1.6 kilometers in length, most of the concrete slabs appear to shatter at any time.
To many locals, it’s a wonderful time to hear the whisper of the winds, feel the cool fresh air of the sunset and observe the daily lifestyle of locals. When the night is getting darker and darker, tourists can involve in the crowd who are eager to come back home after a hard-working day.

One highlight that most tourists fancy when traveling Long Bien bridge is passing by vendors along two sides of Long Bien bridge. These vendors sell fried corns and sweet potatoes, which appeals to lots of the young, especially in the winter. It sounds fabulous to sit together, sipping a cup of green tea and enjoying the cold atmosphere of the winter.

Popular posts from this blog

HERE THE ONE OF THE 6 MOST ATTRACTIVE BEACHES IN THE WORLD (Center Vietnam): It can be said that My Khe beach has met all the basic criteria of Forbes

April 10, 2019
With a coastline of 35km long from Hai Van Pass to Non Nuoc, Da Nang is one of the most beautiful coastal cities in Vietnam. Closed to the city center (5km), the most popular beach My Khe is the common name of the coastline lasted 10km from the base of the Son Tra Peninsula to the Marble Mountains (Ngu Hanh Son). It's just 5km to get here from Da Nang city center and 25km from Hoi An. My Khe Beach is famous for its blue sky, smooth white  sand, gentle slope, clear & warm water year round and beautiful areas surrounded by coconut trees. Everything around you is peaceful, natural, relaxing, that's why Forbes Magazine selected My Khe beach as “one of the most attractive beaches on the planet” title. This recognition was given after an endless effort of the government and the Da Nang Lifesaving Association in keeping the beach clean, safety for visitors, free admission for tourists, great accommodations...etc. Moreover, My Khe beach was commended as one of 10 most popu
Post a Comment
Read more » »

THE PEACEFUL AND PRECIOUS GEM LINH QUY PHAP AN PAGODA, NEAR DALAT (South Vietnam): where this sanctuary is both peaceful and tranquil, and possesses beautifully fascinating space.

April 15, 2019
Linh Quy Phap An Pagoda is located in Lam Dong Province, where the famous touristic city of Da Lat is situated. With a special terrain position placing on highlands, the pagoda always has a calm and harmonious vibe with green grass, hills and clouds. The pagoda is an ideal destination for those who want to indulge yourself in natural beauty and culture of Vietnam. How to get there? Linh Quy Phap An Pagoda is 21km to the South of Bao Loc of Lam Dong Province in South Vietnam, between Ho Chi Minh Ville and Dalat. To reach the pagoda, visitors need to follow this route:   From Ho Chi Minh City direction to Dalat via Bao Loc City. Arrived in Bao Loc City, go to Tran Phu Street, turn right at Dai Binh junction and head towards the road to Loc Thanh commune (Highway 55). After passing Loc Thanh Market, cross the Da Trang Bridge where you will face a junction. Turn right at that spot, pass Nibbana Pagoda while keeping straight to the crossroads, then turn right. Continue going
Post a Comment
Read more » »

THE EXTREMELY BEAUTY OF HA GIANG (North Vietnam): Awesome beauty of the land and people of Ha Giang Plateau

October 30, 2019
Visiting Ha Giang province at this time, visitors will be overwhelmed by the imposing and picturesque scenery with the fields full of beautiful ‘Tam giac mach’ (buckwheat flowers) as well as the unique daily life and traditional culture of the ethnic minority people of this land. Covering a total of more than 2,300 kilometres, Dong Van Karst Plateau in Ha Giang province is located at an altitude of over 1,000 metres and belongs to four districts - Dong Van, Meo Vac, Yen Minh and Quan Ba. There are now over 17 ethnic minority groups with 250,000 residents, of which Mong ethnic people account for 70% of the population. One of the most famous destinations in Ha Giang is Nho Que river passing through the plot of the legendary Ma Pi Leng mountain pass. With an emerald green colour, the river creates a picturesque beauty. The story of Ha Giang is in many ways the story of the proud and independent  Hmong  who, following the Tay and other ethnic groups, began migrating there i
2 comments
Read more » »