THE WORLD'S LARGEST CAVE IN THE WORLD SON DOONG CAVE (Center Vietnam): besides the beauty that anyone should see that breathlessly overwhelmed by natures...

Son Doong Caves in Vietnam is one of the most beautiful natural caves and the largest ever found in the world. Hang Son Doong cave complex of Phong Nha - Ke Bang National park, located in Son Trach, Bo Trach district, Quang Binh province of Center Vietnam. Son Doon Cave is one of the largest natural cave ever found in the world. Who first discovered as a peasant named Ho Khanh. In 1991, he happened to shelter in this cave while looking deep into the fores. 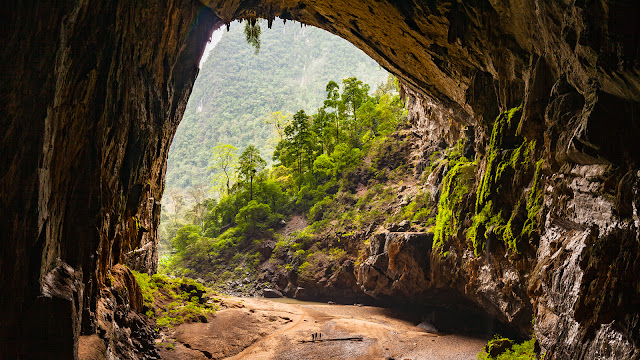 Son Doong cave is more than 200 meters wide, 150 meters high, and approximately 9 kilometers long, with caverns big enough to fit an entire city street inside them, twice as large as Deer Cave in Malaysia (currently considered the world’s largest with 90 meters wide, 100 meters high and 2 kilometers long). Son Doong cave was classified as the largest cave in the world by BCRA (British Cave Research Association) and selected as one of the most beautiful in the globe by the BBC news. 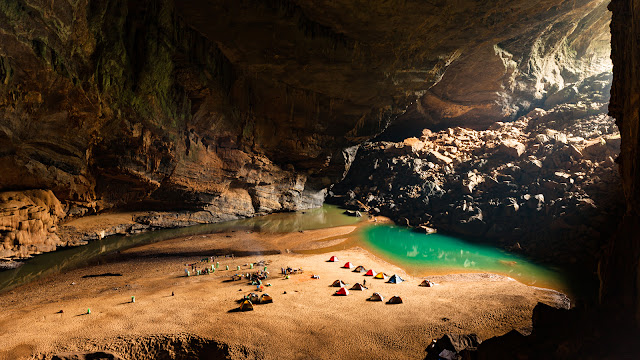 Son Doong cave is hidden in rugged Phong Nha-Ke Bang National Park in Quang Binh province near the border with Laos. The cave is part of a network of 150 or so caves, many still not surveyed, in the Annamite Mountains. It is very difficult to cross. During the first expedition, the team explored two and a half miles of Son Doong cave before a 200-foot wall of muddy calcite stopped them. They named it the Great Wall of Vietnam. Above it they could make out an open space and traces of light, but they had no idea what was laying on the other side, so they stopped the expedition. A year later, in 2010, they returned—seven hard-core British cavers, a few scientists, and a crew of porters – to climb the wall, measure the passage, and push on all the way to the end of the cave…

In early August 2013, the first tourist group explored the cave on a guided tour at a cost of US$3,000 each. Permits are required to access the cave and are made available on a limited basis. Only 500 permits were issued for the 2015 season, which runs from February to August.  After August, heavy rains cause river levels to rise and make the cave largely inaccessible. Oxalis Adventure is the only operator allowed to take tourists to Son Doong.

Popular posts from this blog

HERE THE ONE OF THE 6 MOST ATTRACTIVE BEACHES IN THE WORLD (Center Vietnam): It can be said that My Khe beach has met all the basic criteria of Forbes

April 10, 2019
With a coastline of 35km long from Hai Van Pass to Non Nuoc, Da Nang is one of the most beautiful coastal cities in Vietnam. Closed to the city center (5km), the most popular beach My Khe is the common name of the coastline lasted 10km from the base of the Son Tra Peninsula to the Marble Mountains (Ngu Hanh Son). It's just 5km to get here from Da Nang city center and 25km from Hoi An. My Khe Beach is famous for its blue sky, smooth white  sand, gentle slope, clear & warm water year round and beautiful areas surrounded by coconut trees. Everything around you is peaceful, natural, relaxing, that's why Forbes Magazine selected My Khe beach as “one of the most attractive beaches on the planet” title. This recognition was given after an endless effort of the government and the Da Nang Lifesaving Association in keeping the beach clean, safety for visitors, free admission for tourists, great accommodations...etc. Moreover, My Khe beach was commended as one of 10 most popu
Post a Comment
Read more » »

THE PEACEFUL AND PRECIOUS GEM LINH QUY PHAP AN PAGODA, NEAR DALAT (South Vietnam): where this sanctuary is both peaceful and tranquil, and possesses beautifully fascinating space.

April 15, 2019
Linh Quy Phap An Pagoda is located in Lam Dong Province, where the famous touristic city of Da Lat is situated. With a special terrain position placing on highlands, the pagoda always has a calm and harmonious vibe with green grass, hills and clouds. The pagoda is an ideal destination for those who want to indulge yourself in natural beauty and culture of Vietnam. How to get there? Linh Quy Phap An Pagoda is 21km to the South of Bao Loc of Lam Dong Province in South Vietnam, between Ho Chi Minh Ville and Dalat. To reach the pagoda, visitors need to follow this route:   From Ho Chi Minh City direction to Dalat via Bao Loc City. Arrived in Bao Loc City, go to Tran Phu Street, turn right at Dai Binh junction and head towards the road to Loc Thanh commune (Highway 55). After passing Loc Thanh Market, cross the Da Trang Bridge where you will face a junction. Turn right at that spot, pass Nibbana Pagoda while keeping straight to the crossroads, then turn right. Continue going
Post a Comment
Read more » »

THE EXTREMELY BEAUTY OF HA GIANG (North Vietnam): Awesome beauty of the land and people of Ha Giang Plateau

October 30, 2019
Visiting Ha Giang province at this time, visitors will be overwhelmed by the imposing and picturesque scenery with the fields full of beautiful ‘Tam giac mach’ (buckwheat flowers) as well as the unique daily life and traditional culture of the ethnic minority people of this land. Covering a total of more than 2,300 kilometres, Dong Van Karst Plateau in Ha Giang province is located at an altitude of over 1,000 metres and belongs to four districts - Dong Van, Meo Vac, Yen Minh and Quan Ba. There are now over 17 ethnic minority groups with 250,000 residents, of which Mong ethnic people account for 70% of the population. One of the most famous destinations in Ha Giang is Nho Que river passing through the plot of the legendary Ma Pi Leng mountain pass. With an emerald green colour, the river creates a picturesque beauty. The story of Ha Giang is in many ways the story of the proud and independent  Hmong  who, following the Tay and other ethnic groups, began migrating there i
2 comments
Read more » »